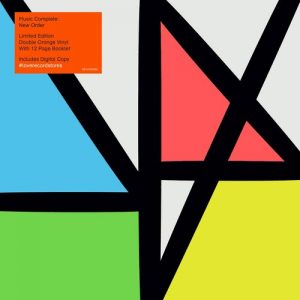 On sale online from 9am June 20th.

For Music Complete, New Order’s ninth album and first in a decade, the band signed to new label Mute and welcomed keyboardist Gillian Gilbert back for her first recordings with them since 2001. Original bassist Peter Hook, who quit in 2007, didn’t return and his bass duties were taken over by Tom Chapman, who played with Bernard Sumner in Bad Lieutenant. The return of Gilbert is a clue that the band is looking to the past for inspiration here and forsaking the guitar-driven rock orientation of its last couple albums for something more balanced, if not tipped in favor of more electronic and dancefloor-oriented songs. To that end, they brought in Chemical Brother Tom Rowlands as well as Richard X and Stuart Price to produce tracks. Not the most daring or forward-looking choices for collaborators, but their efforts result in some of the album’s highlights. Rowlands invests Singularity with some Chemical Brothers-style punch, while Unlearn This Hatred has a passionate, almost industrial drive.