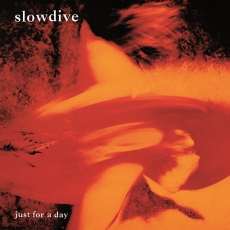 Slowdive – Just for a Day

The production on Slowdive’s debut commenced shortly after Halstead convinced Alan Mcgee, Head of Creation Records, the band had enough songs written for a full-length album. Slowdive actually did not.  The group hurriedly began writing songs in the studio, experimenting with sounds and cannabis during the process.   This eventually lead to their debut album just for a day, released in 1991.